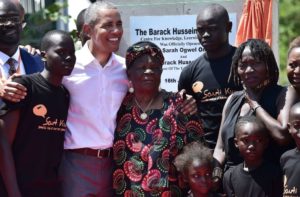 Obama is in Kenya to help launch the sports and training center founded by his half-sister, Auma Obama, through her foundation Sauti Kuu.

In Nairobi, Obama met President Uhuru Kenyatta at the official residence, according to Kenyatta’s twitter account. Obama is also expected to meet Raila Odinga, the opposition leader now working with Kenyatta’s government. Odinga and Kenyatta on March 9 pledged to work together, ending months of turmoil following a disputed presidential election that was nullified by the Supreme Court and a rerun which the opposition boycotted.

Obama’s visit to Kenya is low key, unlike his previous visits where he electrified thousands of Kenyans who lined the streets to see him when he was a senator in 2006 and then as president in 2015.

After his two-day stay in Kenya Obama will go to South Africa where he will give a speech marking the 100th anniversary of the birth of Nelson Mandela and meet with 200 young Africans in the Obama Foundation’s leadership program.

2 thoughts on “Obama travels to Kenya to help support the launch of his sisters vocational center.”